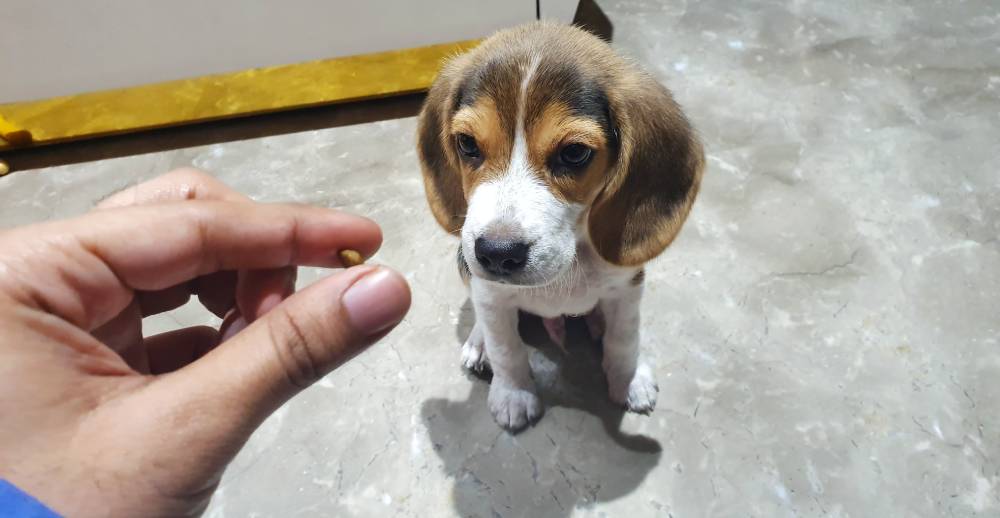 My beagle is a year old now, and I have taught him around 30 different tricks and commands, enough to impress a crowd, lol. I have listed 12 of my favorite tricks that you can teach your beagle.

Play Dead on a Bang

I cannot tell you how many applaud my beagle has earned with this trick. This trick is a little difficult to teach as compared to others on this list. You will need to be patient with your dog for this one. It might take a week for your dog to master this, but its all worth it.

About this trick: You make a sound of a gunshot, a bang, and your dog howls and plays dead.

Step 1: First, you will need to teach your dog to howl on command. For that, whenever your beagle is howling, say ‘Howl’ out loud and treat him. Do it until your pet starts connecting the word ‘Howl’ with his howling. After 30-40 tries, your beagle will start howling after you say ‘howl.’

Step 2: Now that your pet knows the command ‘howl’, its time to teach him to play dead, and by play dead, I mean to roll over on his back and stay there. Rollover your pal on his back, say the word ‘dead,’ and give him a treat. Slowly and gradually increase the time you keep him over his back. Do it until your pal starts playing dead on its own without your support.

Step 3: Once your beagle has mastered the commands ‘Howl’ and ‘Dead,’ its time to teach him to play dead on a bang. Command your dog to ‘Howl’ and then command him to do ‘Dead’ and then treat him.

Step 4: Gradually start saying both the commands together.

Step 5: Add the word Bang before both commands. Once your dog howls and rolls on his back on the command ‘Bang Howl Dead,’ remove the word Howl and Dead and just say ‘Bang.’ And that’s how you teach your beagle to play dead on a Bang.

About this Command: With this trick, you can teach your beagle to bark on your command.

Step 1: Set a word for this command. I have used ‘Speak’ for my beagle.

Step 2: Do something that makes your pet bark; for example, my beagle barks every time he hears our doorbell. And when he starts barking, say the word ‘Speak’ and give him a treat.

Step 3: Repeat this several times. And then try saying ‘speak’ and see if he barks. If he does, then give him a treat and praise him.

Just imagine asking your beagle ‘What’s 2 +1?’ and your pal barks three times. How great would that be?

How this works: Well, your dog won’t be doing maths here. Its a trick in a true sense. You have to associate the barking command with your hand gesture. For example, Your dog will bark when you raise your hand in the air, and he will keep barking until you lower your hand.

Step 1: You will first need to teach your dog to bark on command.

Step 2: Keep the treat in your left hand and raise your right hand.

Step 4: Repeat this several times. And now raise your right hand again, make him speak twice and then bring your hand down.

Step 5: Increase the number of barks.

Step 6: Keep changing the number of barks until he understands that he has to bark until the hand is not lowered down.

How convenient it would be if your beagle rings the bell when he needs to go out for peeing and pooping. For this, you will need a bell. I recommend installing the bell inside your house, near the door.

NOTE: This trick is for beagles who have been house trained and pee/poop outside the home.

Step 1: Whenever you take your pet out for doing his business, ring the bell before you open the door.

Step 2: After doing this several times, hold the treat above the bell where your pet is unable to reach. This will make a stand on his two legs and lean on the door to reach the treat.

Step 3: Take his paw and press the bell.

Step 4: Open the door and take him out(do not give him the treat just yet).

Step 5: Treat him as soon as he is done with his business.

After repeating this several times, your beagle will start associating the bell with going out for nature’s call. This trick might take longer, but don’t give up on trying.

Most beagles usually do tug with a piece of cloth or their favorite toy without even teaching. But you can teach your pet to play tug with you on your command.

Step 1: Show your pet a piece of cloth and say ‘Take it.’ Knowing beagles, your pet will come running to you to grab that cloth.

Step 2: Give him a treat for coming and grabbing your offered cloth.

Step 3: Tug the cloth when your beagle has grabbed it. When your pal pulls back, give him a treat.

How amazing it would be if your beagle brings newspaper right to your bed every morning. And the newspaper is just the start; you can teach him to bring your slippers or even a beer.

Step 1: Keep the newspaper on the ground near your dog.

Step 3: Once he gets used to picking up a newspaper, teach him to bring it to you. For that, as soon as your beagle grabs the newspaper, say ‘bring,’ take the newspaper from his mouth, and treat him. Start going further before you say ‘give.’ Repeat until your pet brings the newspaper to you on your command.

Step 4: Put the newspaper at the door and make him pick it and brink it to you.

Step 5: Start saying ‘Bring Newspaper’ before ‘take’ and ‘give’ command.

Step 6: After repeating this several times, stop saying ‘take’ and ‘give’ and just say ‘Bring Newspaper.’

The coolest thing your little buddy can do is give you a high-five when you have friends over.

Step 1: Gently raise your beagle’s paw and give a high-five.

Step 2: Say ‘Paw’ when you are high-fiving

Soon your dog will give you a paw-five when you say the command.

Beagles are cuddlers. This is something they can enjoy too.

Step 1: Kneel on the floor and command your dog to sit next to you.

Step 2: Gently raise your dog’s front paws and place them on your shoulder as you say ‘Hug.’ Make sure to hold your dog.

Step 3: He might get excited, let him calm down, and then reward him.

Step 4: Say ‘okay’ and put his paws on the ground. And then reward him.

Well, a dog’s training is incomplete without teaching him ‘FETCH.’ Beagles LOVE playing fetch. It is a fun as well as an excellent exercise for a beagle.

Why is Fetch the Favorite game of every Beagle?

Beagles are a hunter breed. In the past, humans and Beagles use to hunt side-by-side. They use to chase small animals for their human companion. Something similar to playing fetch right? Chasing an object, and bringing it back is beagles’ natural instinct. And that’s why they love playing fetch so much.

Step 1: First, you will need to teach him ‘Take’ and ‘Bring’ commands. Put a ball near him, and as soon as he picks it up, say ‘take’ and reward him.  n

And for ‘Bring’ take the ball out of his mouth and give him a treat. Repeat until your dog gives you the ball on ‘bring’ command.

Step 2: Show the ball to your pet and make him to ‘Take’ and ‘Bring’ once.

Step 3: Throw the ball a little further and command him ‘Take’ and ‘Bring.’

Okay, so its Sunday night, you come home tied. You drop on the bed just to realize that you forgot to turn off the lights. How about you ask your beagle to do it for you?

Step 1: Use a training stick and point it to the switch.

Step 2: As soon as your dog leans forward and clicks on the switch, say ‘Lights’ and give him a treat.

Yes, you can teach your beagle names of different things, too, like newspapers or slippers. This will help your beagle to understand more specific commands like ‘bring a newspaper.’

Step 1: Hold any object, let’s say ‘slipper’ and have your beagle touch it.

Step 2: Call out the name of the object, have him touch it, and then treat him.

Walk backward is a handy command which you can use to redirect your beagle.

Step 1: Stand in front of your beagle.

Step 2: Step forward until your beagle takes a step backward and treat him.

Step 3: Now repeat it by adding the ‘Backward’ command to it.

Step 5: Repeat this command until he understands that backing up will reward him a treat.

Step 6: You can even use a hand gesture instead of a command.

You might have heard that beagles are hard to train and teach tricks. It’s 100% true. Beagles are sturdy. According to a study, beagles take around 80 to 100 repetitions to learn a command. But this doesn’t mean that they are dumb. They are very intelligent.

You can say that they are too smart to get trained and follow commands. You can take this test to find out how intelligent your beagle is. Don’t worry, just be patient with your beagle and don’t give up. These cuddle monsters are totally capable of learning, and following commands, it’s just that they are tough.