Beagle puppies need the utmost care and attention, right from providing them nutritional diet to understanding how are they trying to communicate with us. Whining, growling, and howling are the forms of communication they use. They are vocally expressive and make various voices to convey different feelings, one of which is whining. But why do beagle puppies whine?

Beagle puppies have fair knowledge about their surroundings and understand their owner’s behavior too. They find a reason to communicate what they want or have trouble doing something. Similarly, you should have an understanding of why are they whining.

Beagle Puppies whine to communicate their mental, physical, and emotional state. For instance, if your pup’s toy is stuck under the couch, they may whine and scratch the couch letting you know the situation. Once you understand their body language accompanying while they are whining, problems can be solved easily. Prominent reasons why Beagle puppies whine are:

Beagle puppies would try every way to communicate with you and express what they need. They would make an effort to tell you that they are hungry, need water, or want to play with you.

If you are dining on your dining table, and your pup comes whining or scratches the table, it may be a sign your pup is hungry. Encouraging such behavior can get worse in the later future. If your pup repeats the same thing make sure you try to adopt a habit and reconsider your actions. Similarly, if your Beagle pup whines to go out now and then, probably they are suffering from a digestive or bladder issues.

Beagles are known to have separation anxiety, and they express their feeling by whining. Beagle puppies whine when they are away from you or have no one to snuggle around. They are known as the most social breed around the globe. Likewise, they need constant love, care, and attention. They aren’t the type of breed who can be ignored for a longer time.

If you are trying to make a new change in your routine and are not around your puppy for a longer time, they would feel unwanted. They like seeking attention from you even when you are on a phone call or focusing on something for a longer time.

Whining can be one of the reasons your pup is expressing physical distress. If your Beagle pup is in pain or any kind of discomfort, they would be irritated and whine. Check for signs like any injury or are they limping while doing any physical activities.

If your pup whines every time he jumps on the couch probably they would be suffering from arthritis. Sometimes, they whine in pain just to make themselves feel at peace and calm.

Beagles seek a lot of attention and mainly this breed pets can’t be left alone for a long time. Beagle puppies would whine with their high-squeaky voice and let you know they are bored. Their high-energy levels can drive you crazy, also they need constant recognition.

Noticing your Beagle puppy getting anxious, panting while whining? Maybe your pup is stressed, afraid about an incident or someone new in the house. You may also experience them licking, yawning gestures while whining. This is one of the ways your Beagle pup is trying to tell you they are scared.
Those unpleasant gestures are not a threat to the owner or the guests, but a sign they are making themselves comfortable and relieving stress. Their obsessive behavior shows a submissive body language. They would whine and avoid contact with anyone.

Whining can be one of the reasons they are sorry for something they did. When you are angry with them for ruining your pair of shoes, they whine to show they are sorry. They adopt a submissive posture as body lowered, tail tucked, and gaze averted while whining.

How to stop their Whining 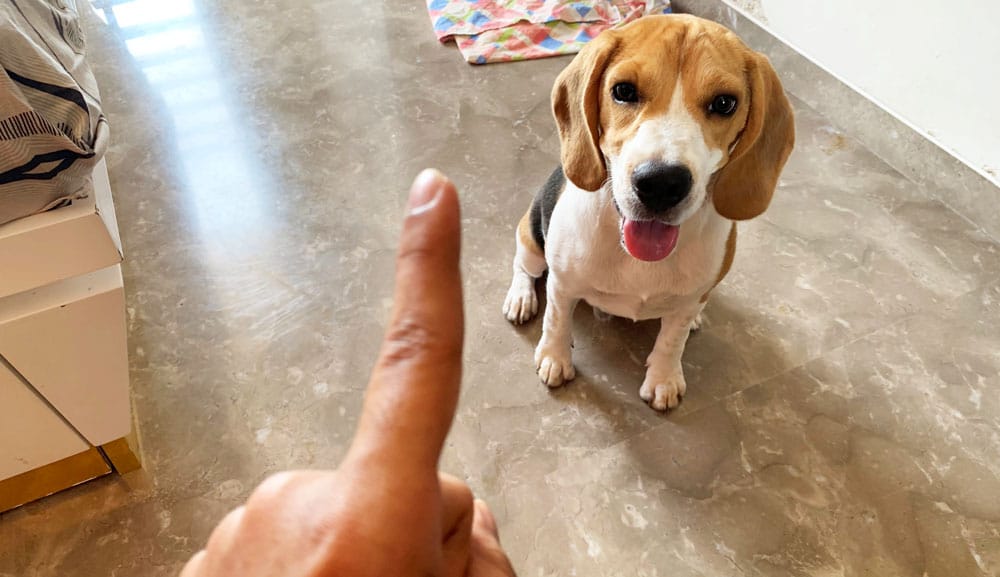 As an owner, you need to understand why your Beagle puppy is irritated and whining. It is okay if your pup is whining for some time, but a Beagle’s high-pitched voice can make you wonder what’s wrong. You have to deal with their different whining voices and recognize if it’s something really important or not.

Sometimes, ignoring or responding selectively works. If there’s no real need for attention then try ignoring their stubborn behavior. Once you notice your puppy has stopped whining you can praise them with a treat or a reward. This is the best opportunity you can practice the quiet command.

Your Beagle pup can show some unpleasant signs while whining like a tucking tail, crouching on the back, turning the body sideways. You need to build your pup’s confidence to reduce these types of signs. Playing some interactive games can increase your puppy’s confidence. Punishing them verbally can decrease their confidence and make them continue their unpleasant and annoying behavior.

Pay close attention to your pup’s behavior, and body language when they are whining, once you have a proper understanding you may get hold of different pitch. You would know when they are actually ‘bored’ or ‘hungry.’

If your Beagle pup has serious separation anxiety and whines while sleeping alone, you need to make them feel secured and snuggle affectionately for a while. Keep your soiled shirt in his crate or your puppy’s room so he feels you are around. But encouraging them to sleep with you whenever they whine can lead to bad behavioral habits. Try and keep them engaged with a few tasks.

It’s hard to resist when your Beagle puppy starts whining, but taking decisions according to your puppy’s behavior can make them adamant. Try adopting a habit and then reward them with a treat.

If your puppy continuously whines when they are bored, set a time to play with them. Researches state animals respond very well to a routine and consistency. It will ease things out for both you, and they will get used to it.

In the same way, you can set a time for some physical or outdoor activities for about 30 minutes. As Beagles are hunting dog breeds, they would get restless if they don’t have any physical activities. These exercises would make them feel calm and energetic too.

You can try out tricks to stop them whining like a makeshift noisemaker. Put some coins in a tray or can. Every time your puppy starts whining shake the noisemaker vigorously, this will make your puppy realize their noise is not a good one.

Your Beagle pup can be really excitement and whine when they are greeting you and may not have control over their mental state. This time you should use management procedures like downplay greetings. When you meet them try lowering your voice and excitement. Wait till your puppy stops whining and less excited.

Give your Beagle puppy what they want but under certain rules. In this way, there will be discipline and your puppy will adapt it with time. Such as, you are taking them for a potty break, it better to use a leash so they don’t create any nuisance in the park.

Don’t punish your cute little puppy, maybe ignoring their stubborn whining for some time can work. Extensively understand their reason behind whining and act accordingly. Distract your Beagle puppy from the situation. Make them learn new things and don’t melt when they start whining. Staying consistent can lead them to adopt some new habits for betterment.

Whining can be managed by basic training techniques and some activities. If you think these techniques aren’t working maybe you can seek a good trainer. You need to be patient and though with your Beagle pup for desired results. With this, you may not completely get rid of whining, but unnecessary habits would be in control. As the leader of the pack, you need to make decisions when your Beagle puppy whines unwontedly and later abuses them.

Sometimes it’s cute to see a Beagle puppy whining, but if they do it for a long time; their shrill voice can be pesky. You must understand what your pup is trying to communicate with you.

Whining can get attention and your cute puppy knows that. This is the easiest way a Beagle puppy can have what s(he) wants from you. There are many reasons your puppy is whining, most of the time it unnecessary and just wants attention. Having a fair knowledge about what different squeaky whining noises explain, things would be much easier for you.